"Nigeria – Floods Hit Lagos, Situation Worsens in Niger and Adamawa States 27 OCTOBER, 2019 BY FLOODLIST NEWS IN AFRICA, NEWS Flooding has affected several states of Nigeria over the last few days, in some cases worsening a situation that first began in late August this year. Wide areas of the country's north east were hit by flooding from late August this year. Central areas of the country were also affected around this time. Heavy rain that began on 17 August, 2019 caused flooding in Bosso and Chanchaga Local Government Areas of Niger State, leaving 3 dead and over 500 displaced. Continued heavy rain in September increased levels of the Niger and Benue rivers, causing flooding in Cross River, Kogi and Taraba states, as well as Niger State where 11 deaths were reported. Since then the death toll has increased to 18 in Niger state, according to media reports quoting Niger State Emergency Management Agency sources. The sources also said that almost 42,000 people have been displaced and 2,714 houses have been destroyed due to the disaster. In Adamawa State, around 40 villages are under water after flooding from the Benue river, according to News Agency of Nigeria (NAN). Quoting Adamawa State Emergency Management Agency, NAN said heavy rain from around 23 October caused the river to break its banks. There was also some speculation that the flooding was linked to the release of water from Lagdo Dam in Cameroon. Farmland and houses along the Benue river have been destroyed. According to officials, flooding has affected communities in the local government areas of Fufore, Yola South, Demsa, Numan and Girei. Rainstorms and flooding affected parts of Adamawa State from 01 August, 2019, leaving 7 people dead and dozens of houses damaged in the city of Yola, the Adamawa state capital. In the south of the country flooding has affected parts of Lagos and Ogun states. Local media reported that 6 people died in floods in Lagos from around 21 October after a release of water from the Oyan Dam in Abeokuta city of the southwestern Ogun state. Houses were damaged and business and schools closed." Quoted from Flood List.

Results from the NASA-supported Global Flood Monitoring System (GFMS) at ESSIC, University of Maryland. Date and UTC time is shown. This is flooding as modeled from input precipitation data and topography. The Benue river is eastern branch and predicted discharge is shown in m3/sec.

Compare to direct observational results from the River and Reservoir Watch system at same location on the Benue (screen shot below). This is the second largest flood observed at this location, 1998-present.

Red is all satellite-mapped flooding from this event. Darker Red is FloodScan-detected non-persistent water, *. Blue is a reference normal water extent. Light gray is all previously mapped flooding, since 1999. Over the course of the event, remote sensing data are combined to show all flooded areas. A larger scale geotif version and flood and reference water GIS files are located here. 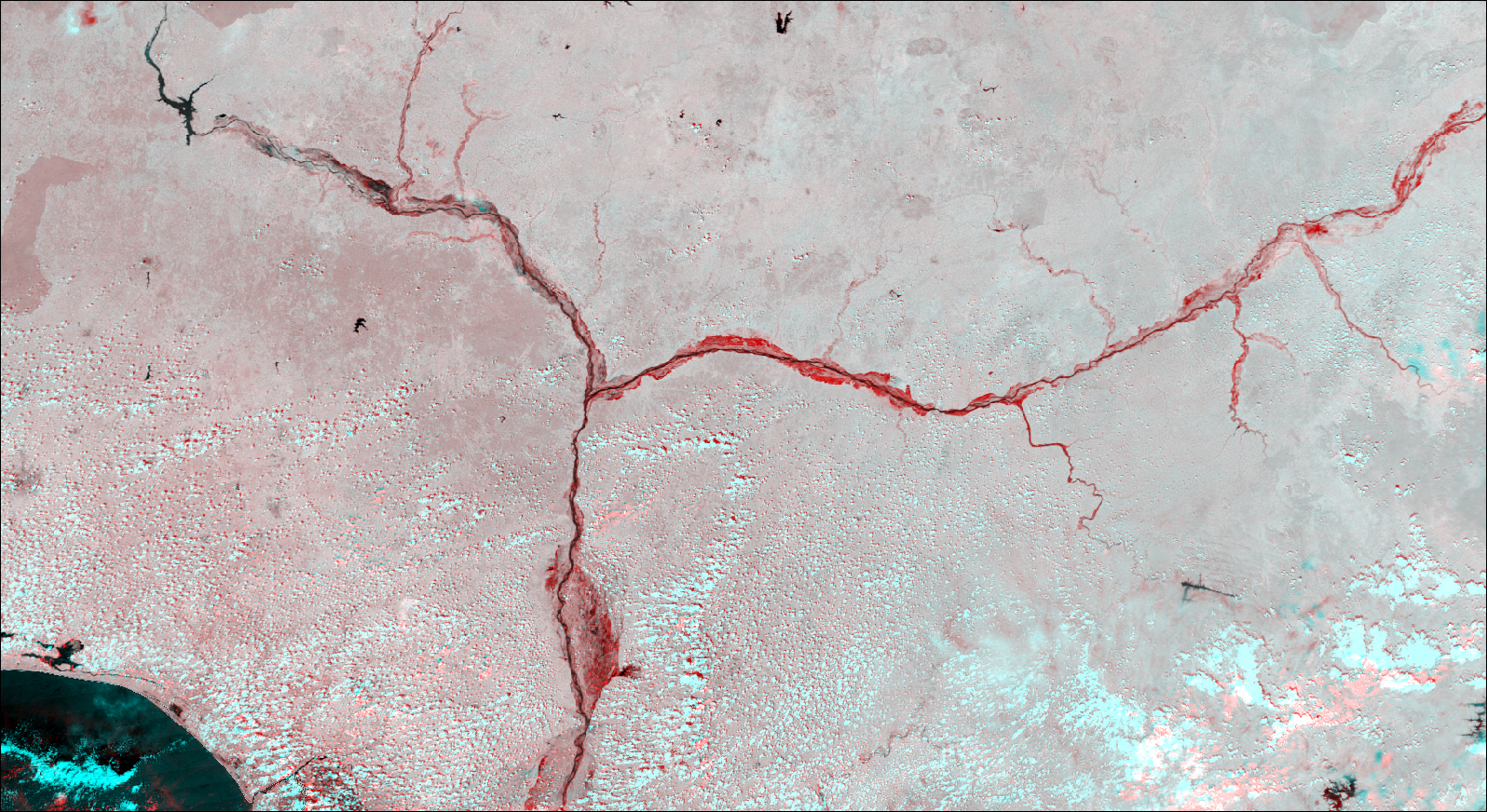 The Flood Observatory maintains a Global Active Archive of large flood events, 1985 to present. New major flood events are entered into this archive each week. A hand-drawn GIS polygon for each event outlines the region affected.

This event was selected for Observatory production of map and GIS data products. After final updating, this web page and associated image and map (GIS) files become the permanent Flood Observatory record of this flood event.

As part of collaborations with other organizations, including GEO and the Global Flood Partnership, the Observatory's maps are made available here to the public. Geotif versions and GIS files are also available. With attribution, maps and data can be used freely for non-commercial purposes. With permission, they can be used for commercial purposes. Consult the Creative Commons Attribution-NonCommercial-ShareAlike 4.0 International License and Robert.Brakenridge or Albert.Kettner (at Colorado.edu) if questions. Attribution for the Maximum Observed Flooding map when Sentinel SAR data are included: "Dartmouth Flood Observatory at the University of Colorado, from satellite data provided by NASA and Copernicus/European Space Agency". When using GIS data (see below) provided to DFO from other sources, please acknowledge original source (e.g., AER for the FloodScan product, Cloud 2 Street, etc).

These files may include high spatial resolution mapping such as from Sentinel or Landsat, or lower resolution files from MODIS. File names commonly include the sensor source (e.g., S1 for Sentinel 1, LS8 for Landsat, MODIS, Aqua, or Terra for MODIS, AER for the FloodScan product) and the image date, and also UTC time where availabl..

The Dartmouth Flood Observatory was founded in 1993 at Dartmouth College, Hanover, NH USA and moved to the University of Colorado, INSTAAR, CSDMS in 2010. Its operation depends on continued grant and project support. If your organization uses these data and maps, please consider becoming a Sustaining Partner and helping to sustain this effort. The institutional support of both universities is gratefully acknowledged.