Each map includes two reference water layers: maximum observed flooding, since 1993, and mean annual flood: the water extent normally reached each year. These provide critical context for understanding present water status. As large scale geotif files, they are also available for scholarly research, on request, and as 10 deg by 10 deg map sheets. Contact co-authors Robert.Brakenridge@Colorado.edu and Albert.Kettner@Colorado.edu). Potential commercial and governmental users can contact Albert.Kettner@Colorado.edu for access and terms of use. All rights are protected by U.S. copyright law.

Blue: All current surface water mapped by MODIS (updated daily). Light Blue Gray: Mean Annual Flood using MODIS and other data. Dark Gray: Maximum Observed Flooding (MODIS and all other sensors, 1993 to present). Displays A-E are the western strip of north to south displays; F-J the middle strip, and K-O are the eastern strip. A one degree graticule is shown also. 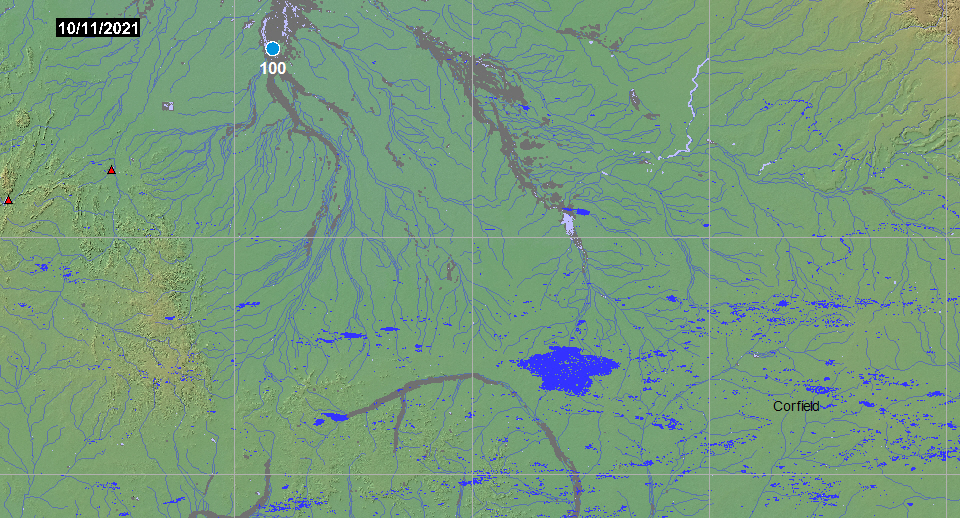 A. Headwaters of the Flinders River in Queensland. From Wikipedia: "Heavy rainfall in Queensland in early 2019 resulted in major flooding along the Flinders, considered the worst in half a century. The broad flood plain has allowed the Flinders to stretch as wide as 60 km. The rising water also caused devastation to farmers with heavy losses to cattle herds." A River Watch site (#100) indicates the flood of record since 1998 occurred in early January, 2008. 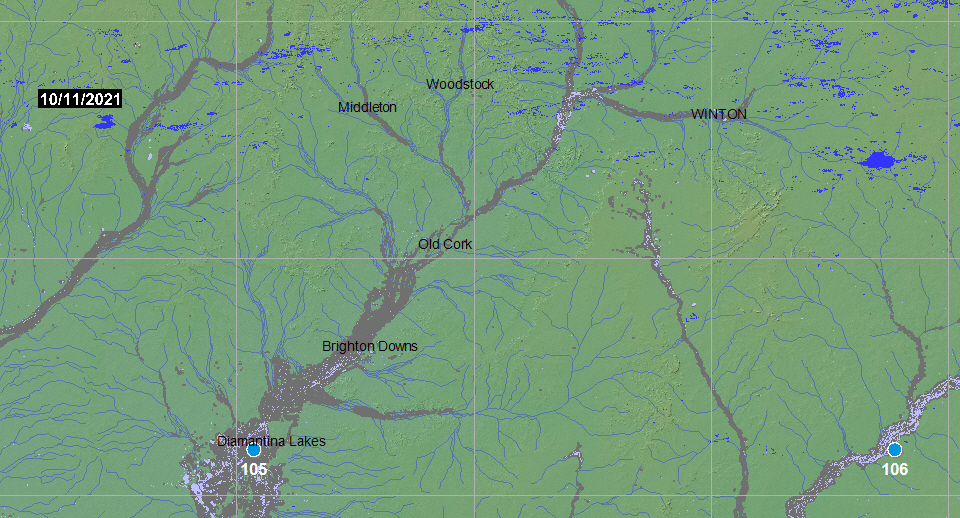 B. Headwaters of the Diamantina (left) and Thomson (right) rivers in Queensland. From Wikipedia: "The Diamantina River is ephemeral but floods periodically following heavy rainfall events in the catchment. In 1950 flooding covered some 7,770 square kilometres with the river described as a raging torrent 48 kilometres wide" River Watch site 105 indicates the flood of record (since 1998) occurred in March, 2019 with a calculated recurrence interval of 25 years; along the Thomson there was also major flooding then, but the flood of record and 25 year event occurred in January of 2000. 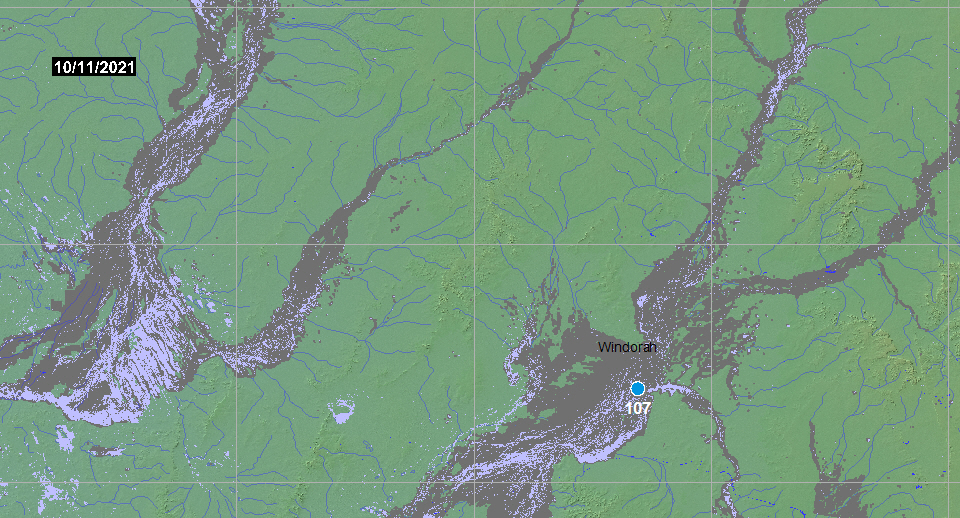 C. The Diamantina (left) and Cooper (right) rivers. From Wikipedia: "Cooper Creek spreads out into a vast area of anastomosing ephemeral channels, making its way roughly south into the far south-west corner of Queensland before turning due west into South Australia towards Lake Eyre. In most years, it is absorbed into the earth, goes to fill channels and the many permanent waterholes and lakes such as Lake Yamma Yamma, or simply evaporates without reaching Lake Eyre". River Watch site 107 indicates the flood of record (since 1998) occurred there in May, 2019. 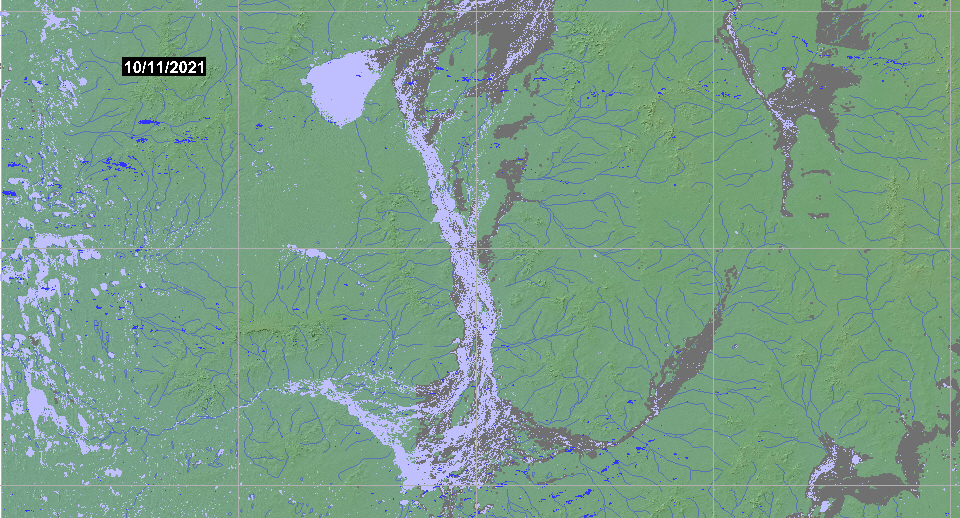 D. The Cooper River floodplain, and Lake Yamma Yamma, near top, are mapped by the mean annual flood.. From Wikipedia: "The lake only holds water following major floods on Cooper Creek. When filled the lake covers 690 km2. It fills to capacity only about once every 25–30 years." 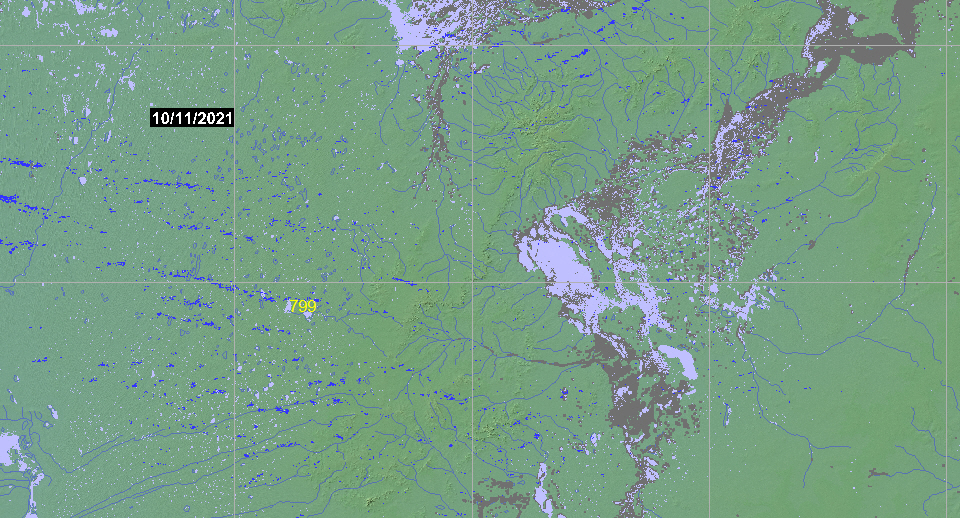 E. Region surrounding Kati Thanda-Lake Eyre, which experienced its largest flood in nearly 50 years in 2019. From Wikipedia: "The shallow lake is the depocentre of the vast endorheic Lake Eyre basin, and contains the lowest natural point in Australia at approximately 15 m below sea level. On the rare occasions that it fills completely, this is the largest lake in Australia covering an area up to 9,500 km2. When the lake is full, it has the same salinity level as seawater, but becomes hypersaline as the lake dries up and the water evaporates." 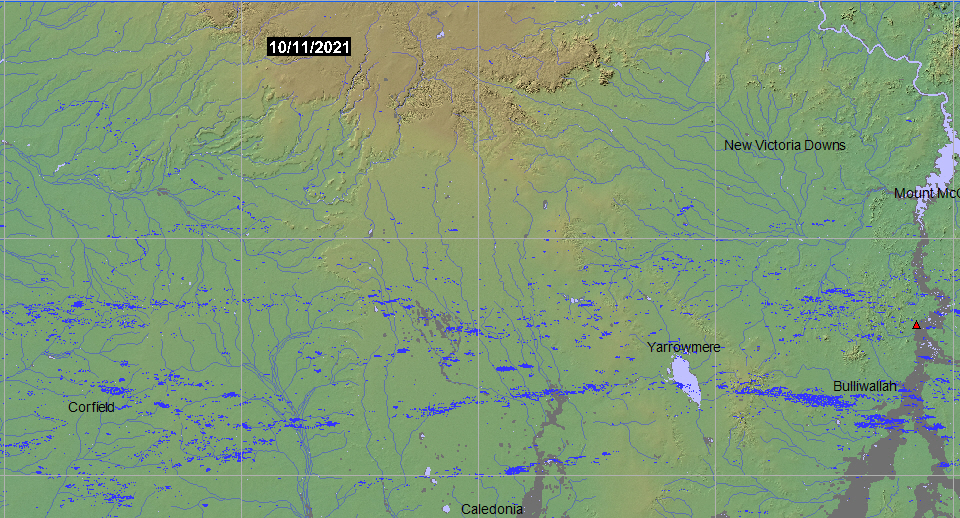 F. Lake Buchanon, near bottom, is mapped by the mean annual flood.. In March, 2021, a much smaller area was being mapped. From Wikipedia: "a flat salt lake at Pentland in North Queensland, Australia. It is part of the Thomson River catchment and part of the Desert Uplands bioregion. .Lake Buchanan is different from all other salt lakes in Australia because it occurs at a high elevation - on the Great Dividing Range. The lake is shallow and the water tends to be brackish. Lake Buchanan contains a number of species which are newly discovered and most probably endemic; the Lake Buchanan blue bush is a threatened species". 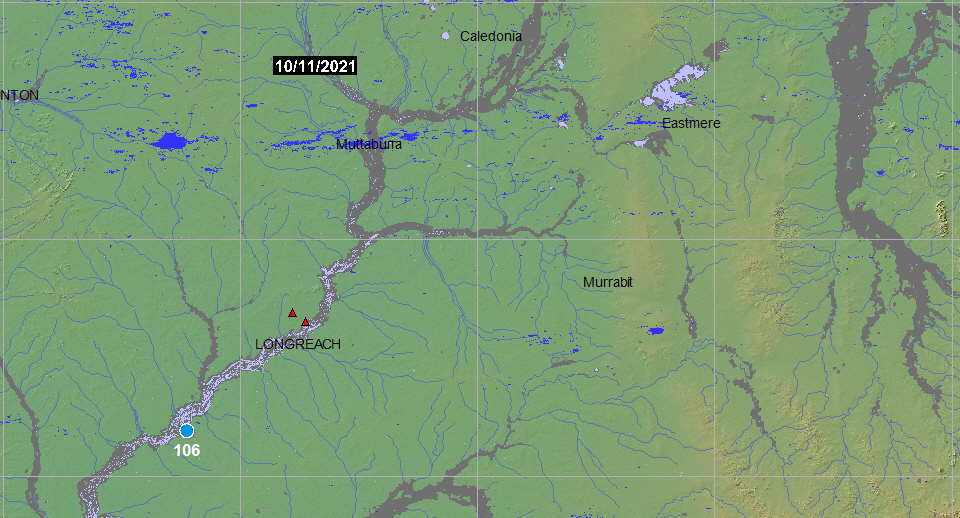 G. Ephemeral watercourse (River Watch site 106) experiences some imaged flow each year; the flood of record since 1998 was in January, 2000. Lake Galilee (north of Eastmere) is a semi-arid salt lake within the Desert Uplands area. Lake Galilee is registered on the Directory of Important Wetlands in Australia and provides an important refuge and breeding site for waterbirds. It has been identified by BirdLife International as an Important Bird Area because it regularly supports over 1% of the world populations of freckled ducks and grey teals and possibly more than 1% of other waterbirds and shorebirds." 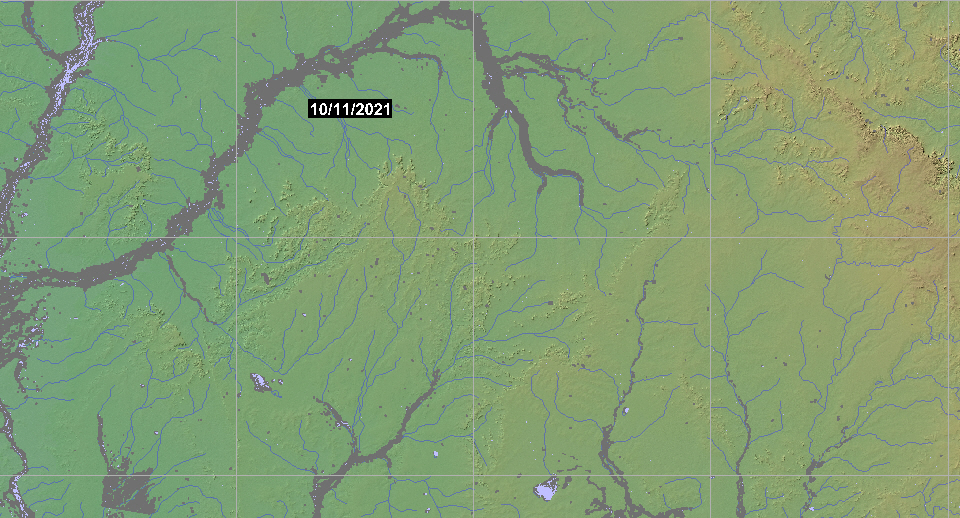 H. From Wilipedia: "As with all of the rivers in the Lake Eyre Basin, the waters of the Thomson never reach the sea, and instead either evaporate, or, in exceptional flood, empty into Lake Eyre. Floods are relatively common within the catchment because of the summer monsoon rains." 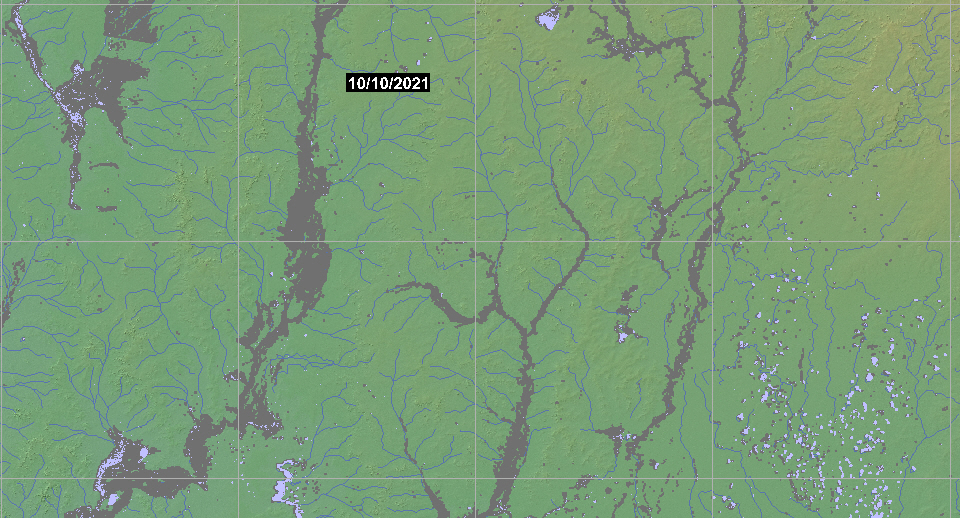 I. Lake Dartmouth, Queensland, near top, is about 10 km east of Mariala National Park (not shown) and is a nationally important wetland. It is wet seasonally. Major ephemeral drainages flow to the south and were mapped while in flood.To the east are numerous seasonally wet small ponds. 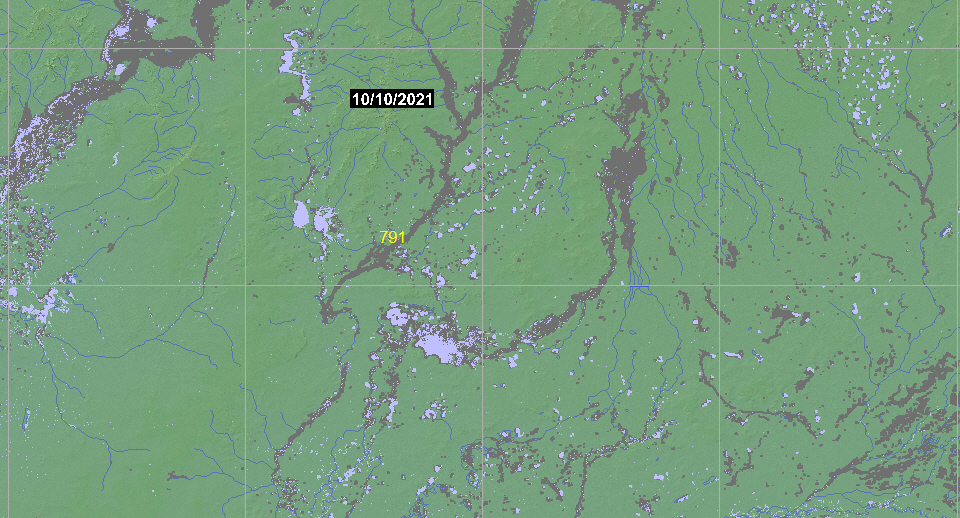 J. Near bottom is a major, seasonally wet depression. Ramsar wetland #791 lies to the northwest and includes permanent water. These are the Currawinya Lakes. From the Ramsar Sites Information Service: "This Ramsar site has some of the most diverse wetland types in inland Australia, including largely unmodified permanent and intermittent saline and freshwater wetlands. They include the Great Artesian Basin springs, one of the largest artesian groundwater basins in the world. The water bodies support large number of breeding birds and provide a refuge habitat in drought conditions for birds, amphibians, reptiles and native fish. The Site is highly significant to local indigenous communities for its archaeological, traditional and contemporary values." 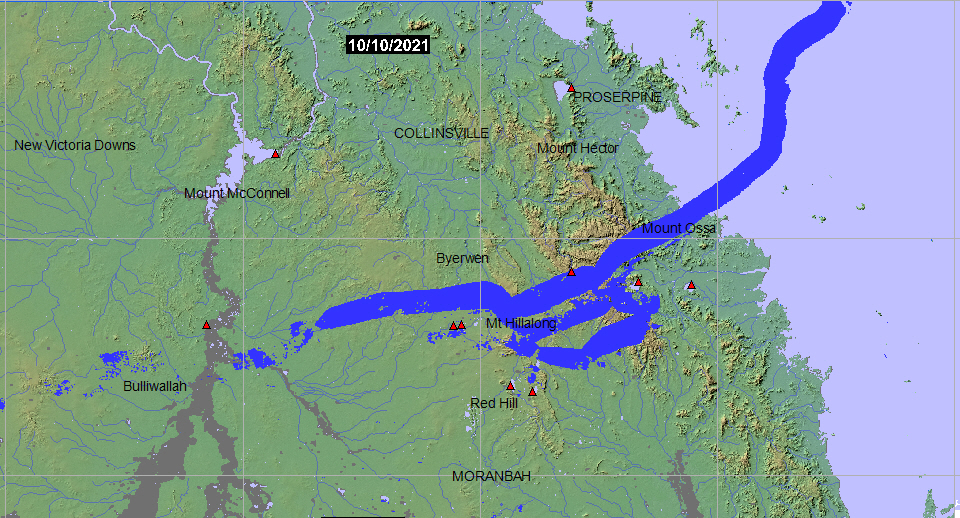 K. Dalrymple Lake, by Mount McConnell is created by a dam (red triangle) on the Burdekin River. This is the largest dam in Queensland and was created as a water supply for irrigated agriculture. 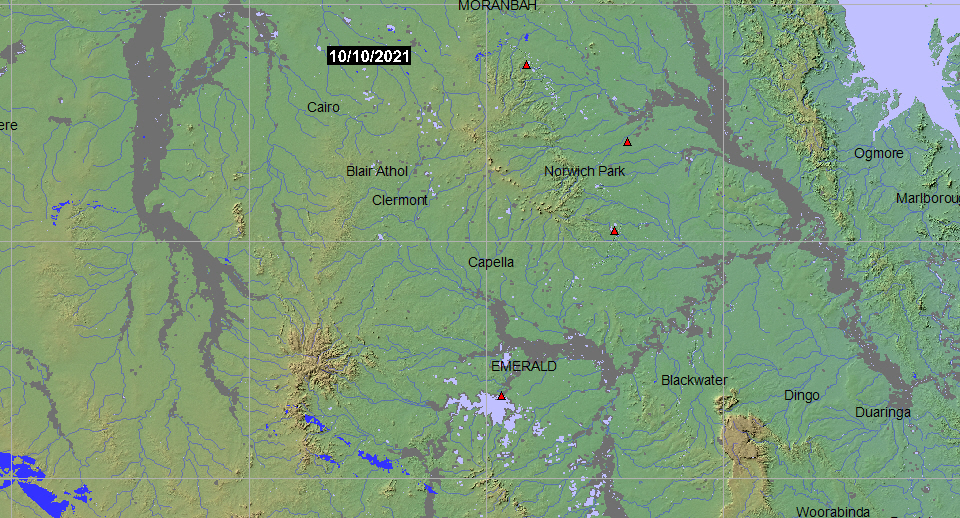 L. South of Emerald is Lake Maraboon, created by the Fairbairn dam (red triangle) on the Nogoa River. This is the second-largest reservoir in Queensland. The reservoir was much smaller than its annual high water in late March, 2021. From Wikipedia: "In July 2003, cotton farmers who were reliant on the dam for irrigation had their water allocation cut by 75%. In November 2006, the dam reached its lowest level ever—just 14% of total capacity. Over that summer low inflows and high evaporation rates had dropped levels to 12%. On 18 January 2008 water in the reservoir overflowed the dam spillway for the first time in 17 years, due to heavy local rain.Within 48 hours, the water level was about 3.5 metres over the spillway level, or 156% of active capacity. The water level peaked at 4.5 metres on 22 January 2008. Downstream 2,700 residents evacuated due to flooding. Seven days earlier, the lake was operating at 29% of capacity." 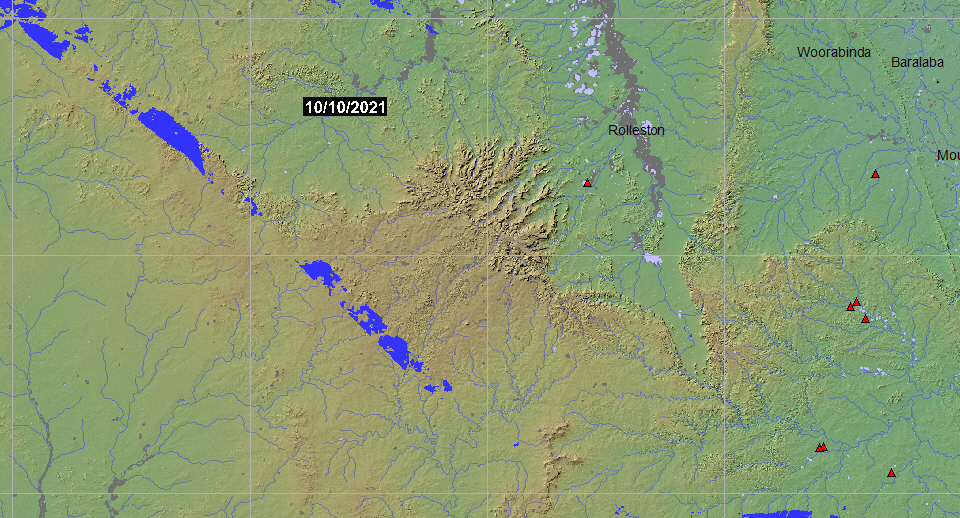 M. Rolleston is a small town along the farmed floodplain of the Comet River. 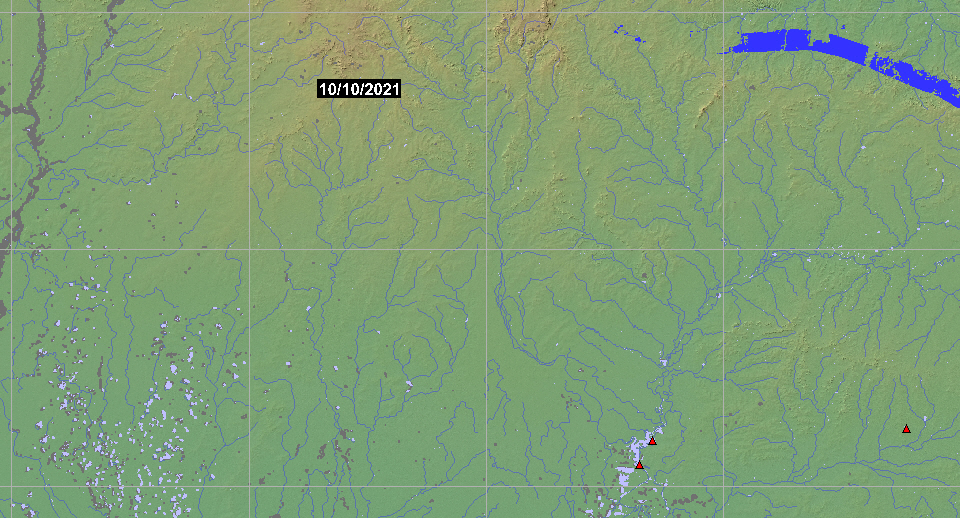 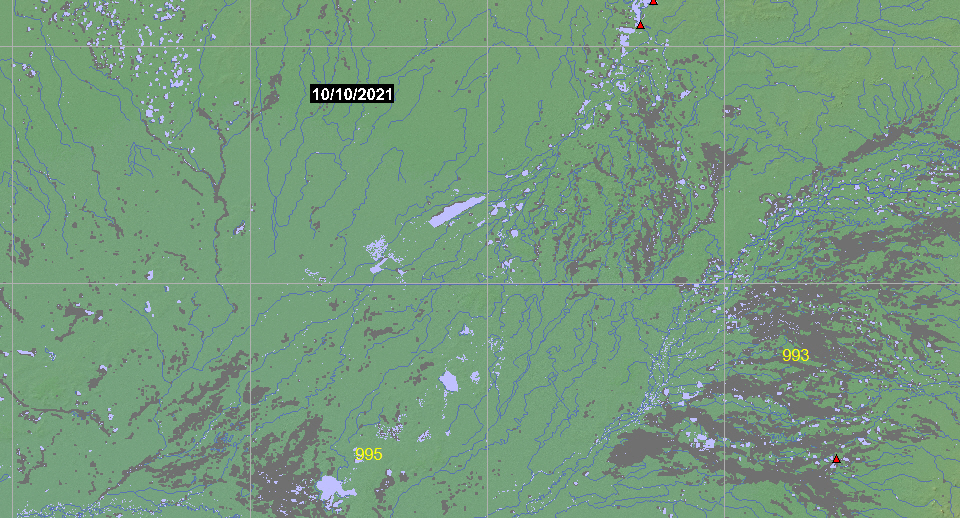 O. Ramsar sites 995 and 993 are the Naram Lake Nature Reserve and the Gwydir Wetlands, respectively. In late March of 2021, there was abundant surface water in the areas around Gwydir. According to the Ramsar Sites Information Service: "This is one of the largest inland wetlands in New South Wales and home to half a million nesting and breeding waterbirds. The area forms part of a much larger wetland system in the Murray-Darling drainage system. Large parts of the surrounding land are used for cotton growing and cattle grazing. Naram Lake is unique within the bioregion for its juxtaposition of highly channelised floodplain and open water wetland.. As part of a large terminal wetland system it plays an important hydrological role in the natural functioning of the Narran River. The vast floodplain is dominated by lignum (Muehlenbeckia florulenta). The Site provides critical habitat for large colonial waterbird breeding events and supports the globally endangered Australasian bittern (Botaurus poiciloptilus). The map indicates the lake to fill seasonally; no water was mapped in late March of 2021.

Blue: Mean Annual Flood. White: Observed flooding greater than the mean annual flood. Updated daily. Displays A-E are the western strip of north to south displays; F-J the middle strip, and K-O are the eastern strip. A one degree graticule is shown also. 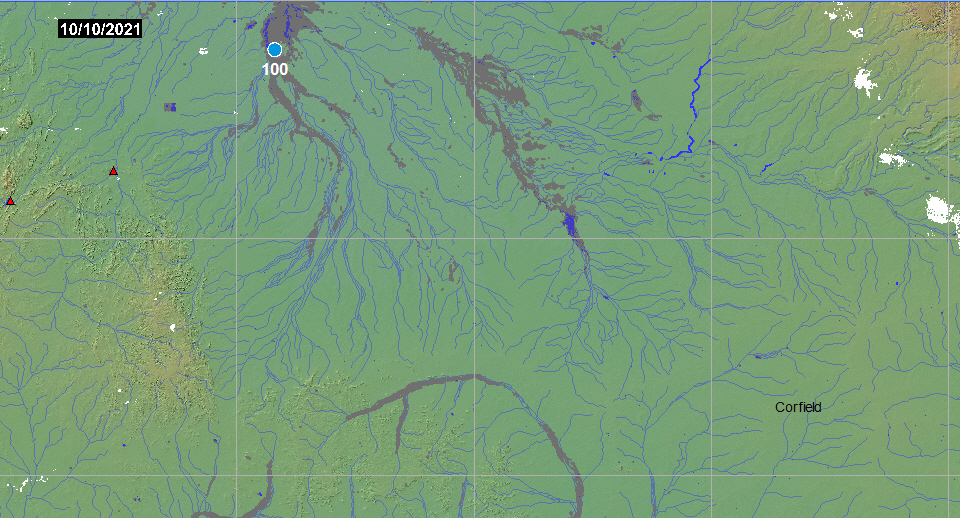 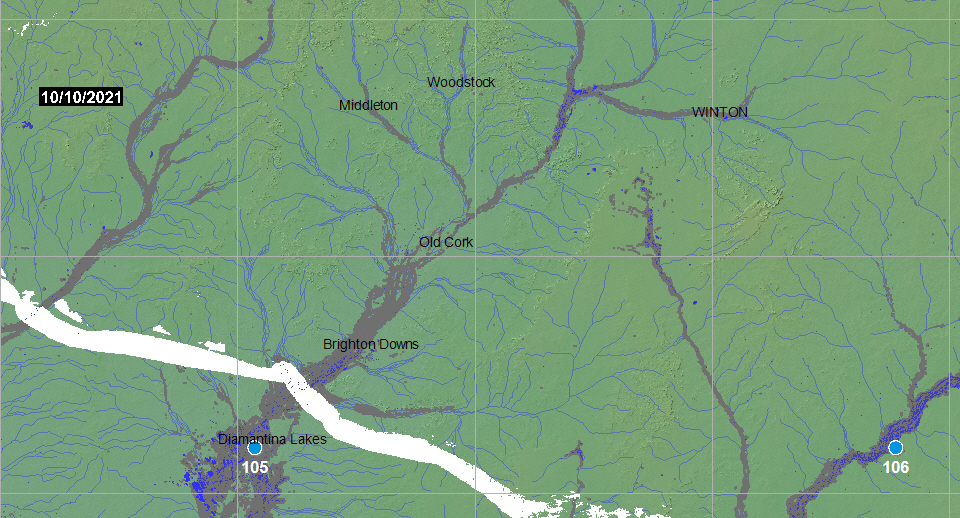 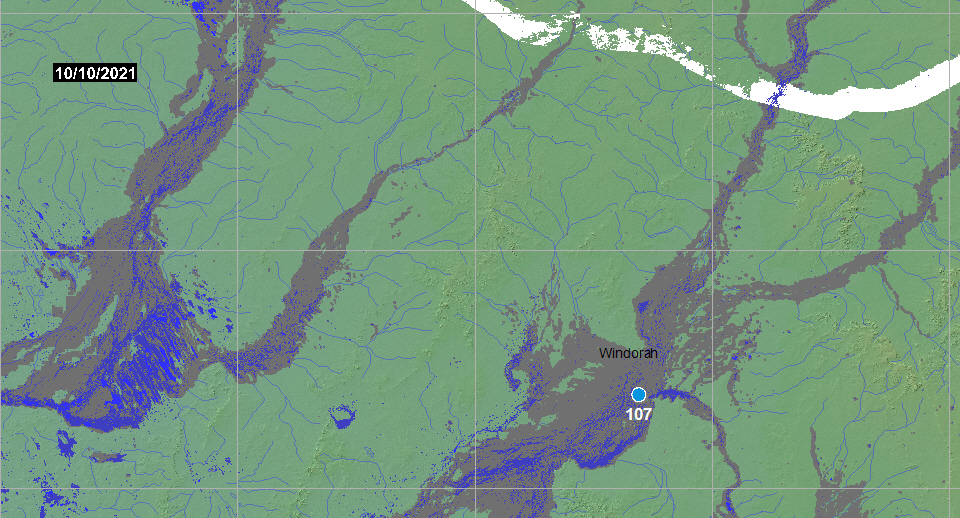 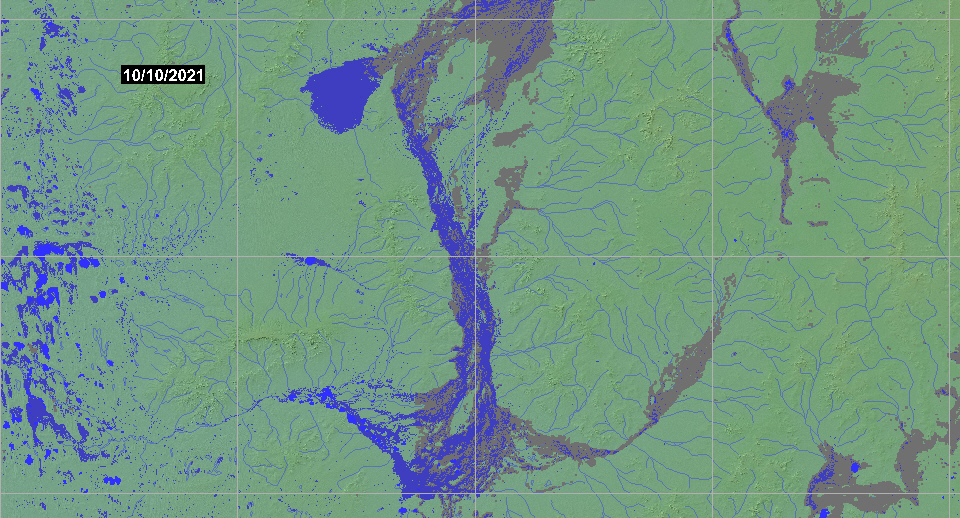 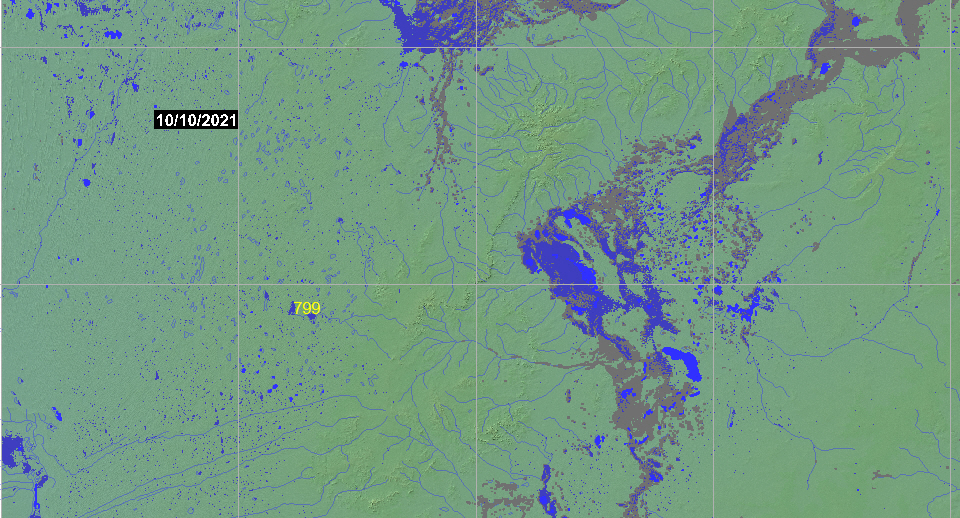 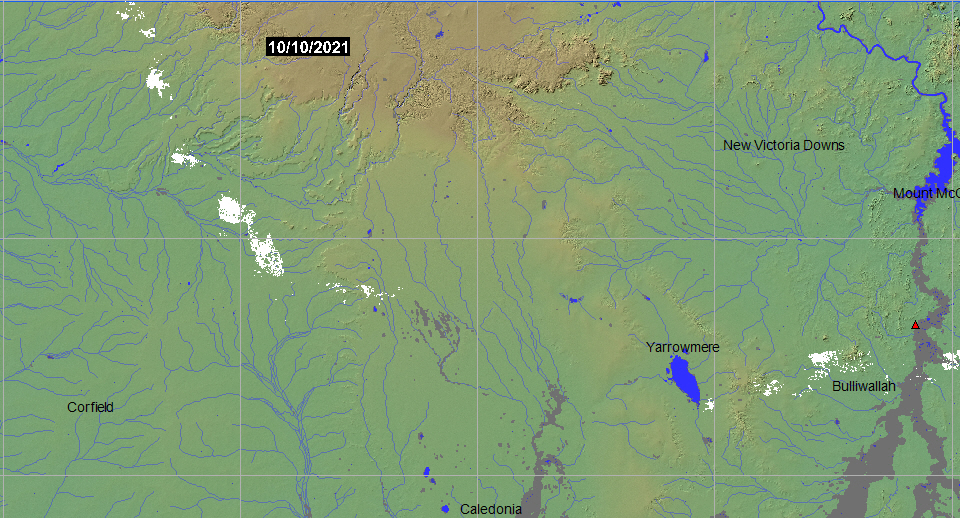 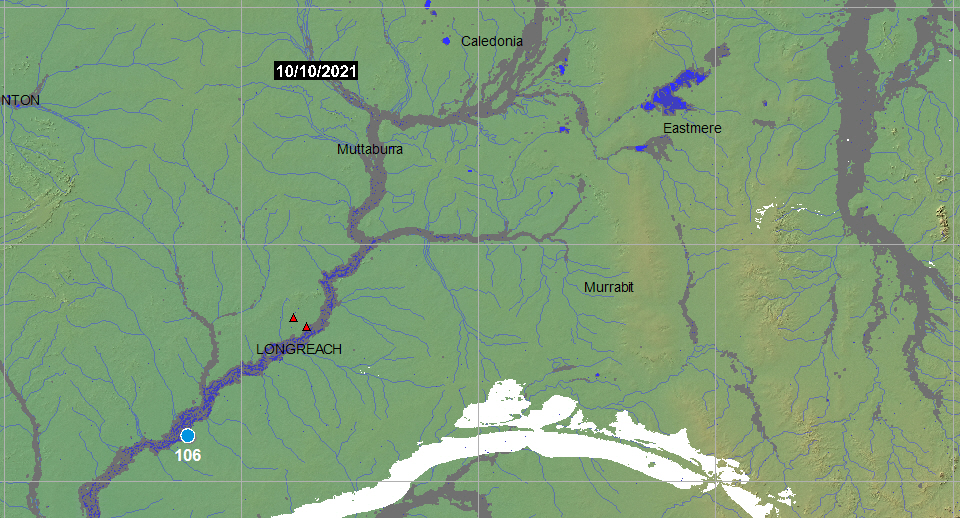 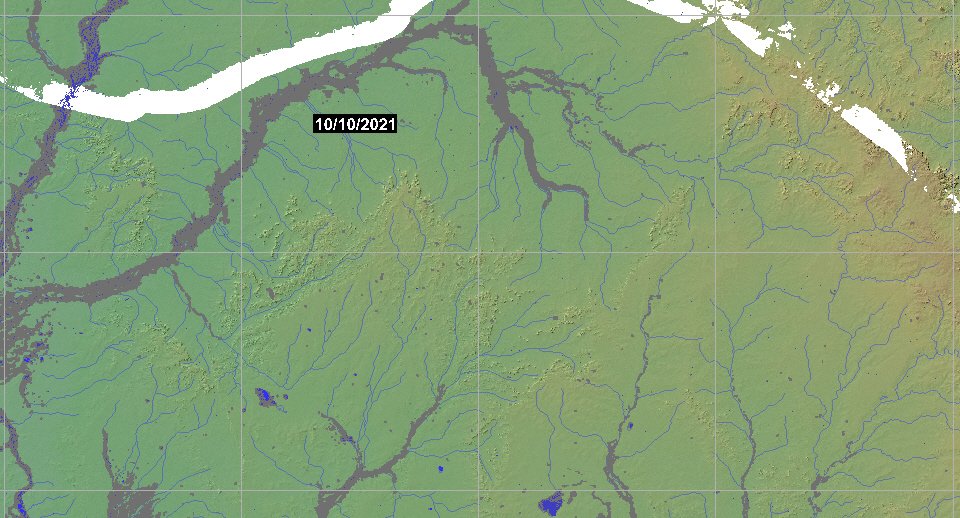 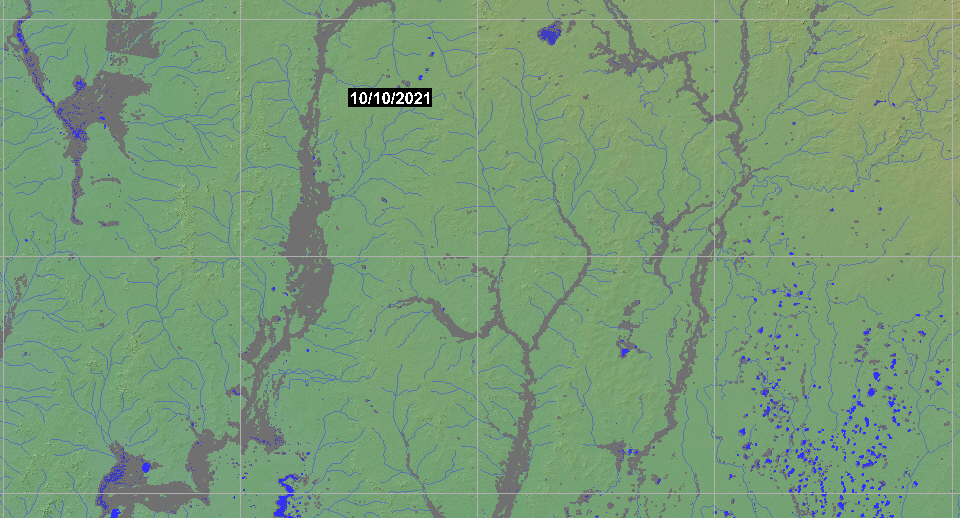 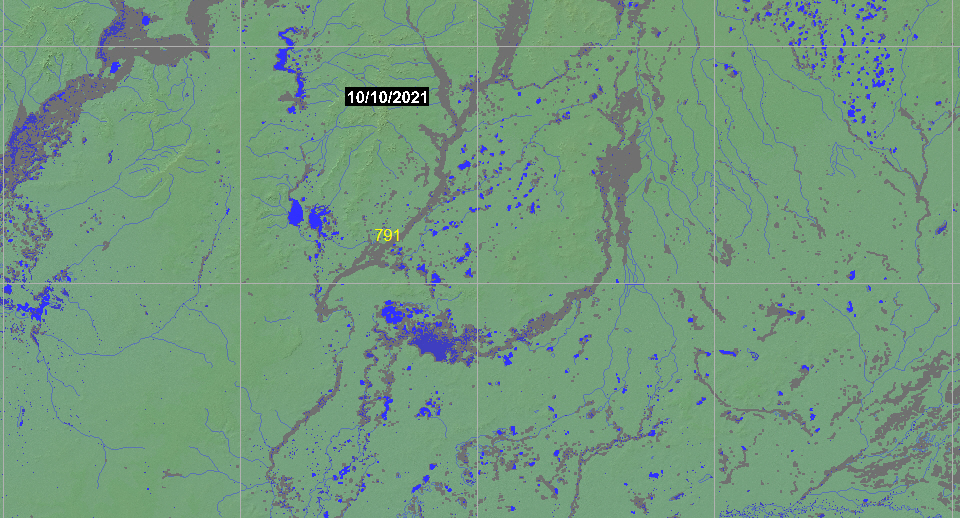 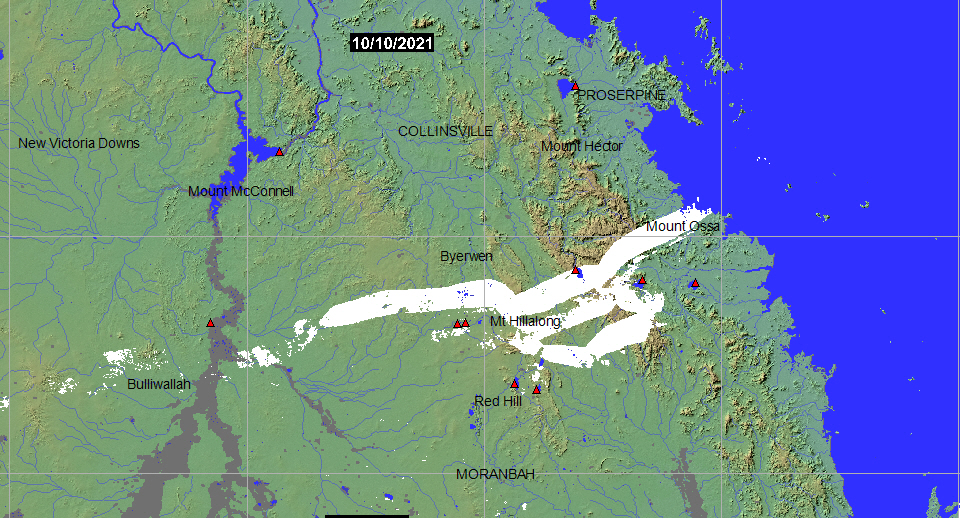 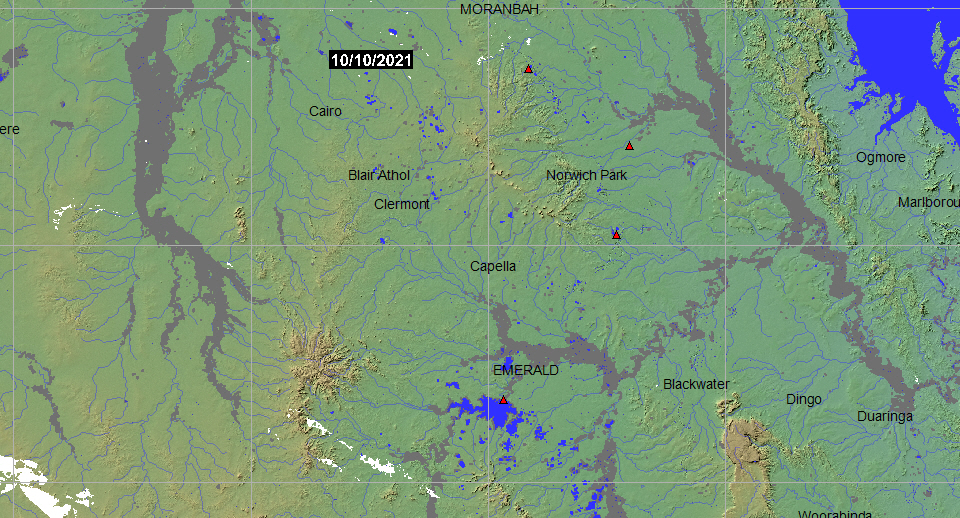 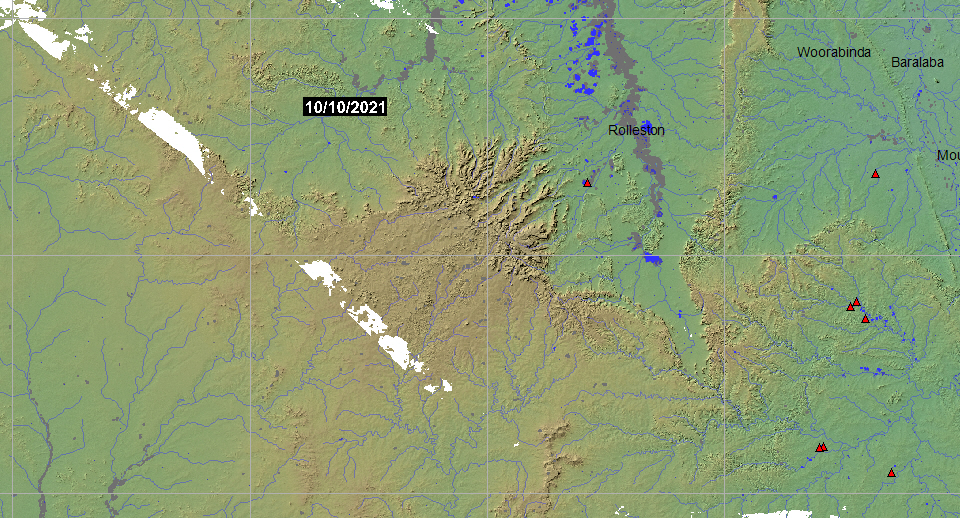 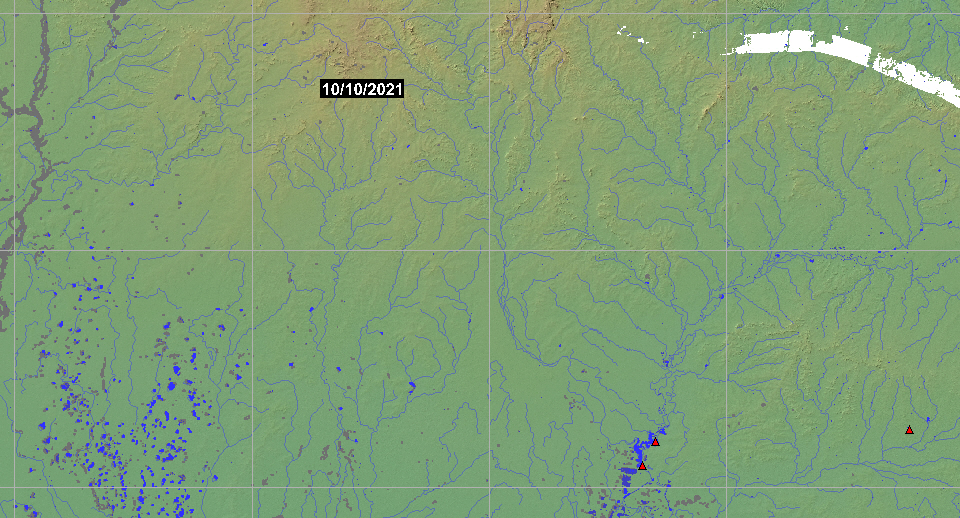 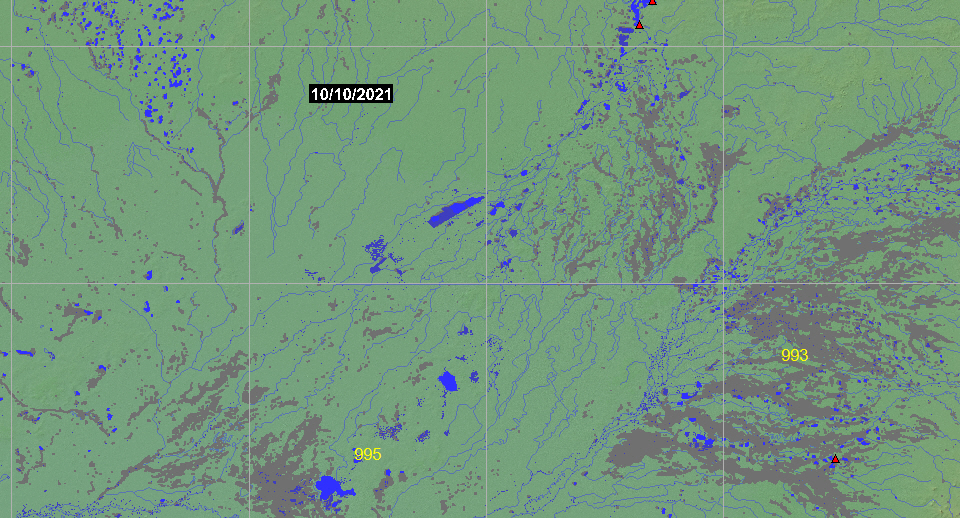 Current surface water or Current flooding is a rolling forward (updated daily) two week accumulation of MODIS-detected surface water. It is calculated at the Flood Observatory using information from the NASA Near Real Time Global Flood Mapping Initiative (NASA LANCE) and is at a spatial resolution of 250 m.

Mean Annual Flood is surface water detected in four out of five years by the same MODIS sensors (2012-2016). Data from the Global Surface Water Explorer at 30 m resolution (the "extent" layer) are also included. In most cases, this Landsat-based survey imaged only frequently present or permanent water.

Maximum observed flooding is a composite of water mapped by DFO since 1993 using a variety of sensors and at spatial resolutions ranging from 10 m to 250 m. This information includes daily MODIS water detection from the near real time flood processor since 2012. This layer is updated yearly. See also flood event pages, and the DFO Web Map Server (to import data, or create different views). Dam locations are from Mulligan, M. Saenz-Cruz , L., van Soesbergen, A., Smith,V.T. and Zurita,L (2009), Global dams database and geowiki. Version 1. http://geodata.policysupport.org/dams. Ramsar international wetlands are listed here.

We gratefully acknowledge the collaboration of colleagues associated with GFP organizations, NASA, and GEO participants. This web site and associated data and graphics are protected by United States copyright laws and are not in the public domain.